My Kind Of (Restaurant) Town

One of the best parts about spending most of a week in Chicago for Chocolate Boot Camp was that Chicago has always been a town that I’ve enjoyed eating in. It’s never really been a ‘fancy restaurant’ town, even though it has two restaurants that have earned the elusive three-star rating from Michelin. Chicago’s more of a ‘good food’ town, whether that’s pizza, steak, ribs, ethnic food or the eponymous (but not lowly) Chicago Hot Dog.

Living in Lincoln, Nebraska, home of Valentino’s Pizza, Chicago-style pizza is still my kind of pizza, deep-dish, stuffed or the old northside thin crust pizza (that appears to have largely disappeared from the scene.) When Peter Reinhart did his worldwide pizza tour (resulting in the book American Pie), he admitted that it took him a while to ‘get’ Chicago pizza. (And I wasn’t entirely convinced he had, in fact, ‘gotten’ it.)

I used to eat a Chicago-style hot dog or an Italian Beef sandwich for lunch nearly every day when I was working in Chicago. (That probably explains my waistline.)

The hotel I was staying at in the River North district was about two blocks away from a Portillo’s Hot Dogs. Portillo’s, for those who aren’t into the Chicago food scene, is a restaurant phenomenon. Starting from one tiny hot dog stand in 1963, Dick Portillo built a Chicago food empire. According to Crane’s Chicago Business, the average Portillo’s location does well over $6 million dollars a year. (By comparison, a good McDonald’s location does about $2.5 million in annual sales.)

Dick sold the chain a couple of years ago to some east coast investors for nearly $1 billion. He wisely kept all the real estate, though, so he still owns the buildings.

So far, it doesn’t appear that the new owners have deviated from the formula that Dick perfected. Always busy, but never a huge wait. (Drive-through is another story, though, I’ve seen traffic jams caused by people waiting in line to go through a Portillo’s drive-through.)

Rick Bayless’s centerpiece restaurant, the Frontera Grill, was also only a couple of blocks away, and I was able to check it out one night. Forget getting a reservation, though, but you can usually get seated in the bar quickly, and we were.

You can’t eat at the Frontera Grill without having some kind of a margarita, and I had the Oaxacan Gold, with chipotle salt on the rim. A spicy way to start a meal.

I had the tortilla soup for an appetizer. It was a lot milder than I expected, and that was a very pleasant surprise. (Far too often tortilla soup is so peppery that you can hardly taste it, this was not the case.)

I only needed one glance at the menu to decide on my entree, duck with mole sauce. (Had my wife been along on this trip, she would has guessed my entree choice with just a glance at the menu, too, she knows I’ll order duck any time I can.) Rick Bayless has said that it took him 20 years to perfect his mole recipe, and it was worth the time investment. And the duck was flawless. 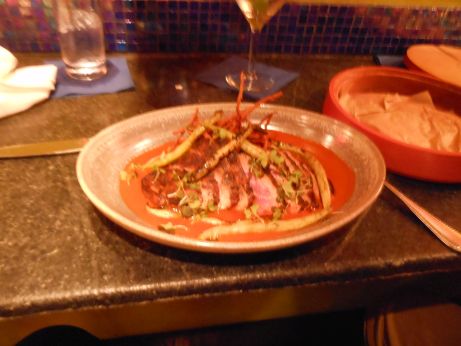 For dessert I had Duo de Flanes, two flans, including one with prosciutto.

I also got to Lou Malnati’s. (Takeout, since it was a 45 minute wait for a table and a 50 minute wait for takeout.) The Stuffed Spinach Bread was the big winner here, the personal sized deep dish pizza was good, though I’ve had (and made) better.

Friday, on the way out of town, I headed up to my old neighborhood of Evanston, the view along Lake Shore Drive alone was worth the side trip. The Hoosier Mama Pie Company was my first stop, I was a little too early for the lunch menu but a couple of hand pies (mushroom and sausage) were delicious. Then I headed up to Bennison’s Bakery. Jory Downer has kept up the tradition here, and was on the USA’s 2005 Coupe du Monde de la Boulangerie gold medal team, so he is truly one of the best pastry chefs in the world, and there’s a trophy in the Bennison’s window to give silent testimony to it. Sadly, though, they’ve discontinued making Pecan Loaf, something we used to have every Sunday and would load up on when we made occasional trips to Evanston after we moved to Nebraska. So, I got a banana loaf (more of a dessert cake than a banana bread), and I bought a dozen macarons, and these lasted me most of a week.

It is always good to get home after being on the road, but I do miss Chicago food, so this was a nice side-benefit to my trip.