Things they don’t tell you about home grain milling

A few years ago I received a Nutrimill machine as a Christmas present from my older son, along with a big bucket of soft red wheat berries.  As Christmas presents go, it’s probably been one of my favorites over the past 25 years, certainly one that opened up a new world for me.

Milling my own flour was not something I had thought about much before that.

It turns out that milling your own flour from whole grain is quite a bit different from buying flour at the store. There are lots of things the people making and selling grain mills don’t tell you.

The Nutrimill comes with an instruction book, but not much instruction.  There are two dials, one labeled ‘high/low’ and one labeled ‘fine/coarse’, which also serves as the on-off switch.  The book doesn’t really explain what either knob does.  After several years of experimentation, I’ve decided I prefer a combination of ‘low’ and ‘coarse’ for grinding hard red wheat and ‘high and ‘fine’ for grinding soft red wheat (which makes absolutely the best croissants I’ve had!)

One thing the book does tell you is not to grind ‘oily’ grains, like flax, in a milling machine.

You also have to find an affordable source for wheat berries (or whatever grain you plan to mill.) Unless you grow it yourself or can buy wheat direct from a farmer, milling your own flour will not save you any money.

My son took care of the soft red wheat supply issue by including a big bucket of it under the tree, but I had to find a source for a harder wheat, which is what most flour used in baking bread comes from.

For several years, I was able to buy hard red winter or spring wheat berries in a 25 pound bag, first at WalMart and later at a local grocery chain that had a Wheat Montana wheat grinding station.  Unfortunately, that store recently got rid of the wheat grinding station, probably due to low sales.

The local WalMart still carries Wheat Montana White Wheat berries, but not hard red wheat. But I was able to find it online at walmart.com, for close to the same price I was paying before.

Next, they don’t talk about ‘green’ flour. Peter Reinhart mentions this in several of his books, where he talks about how he was having inconsistent results baking with freshly milled flour at the Brother Juniper Bakery. It turned out his flour either needed to be used RIGHT AWAY or needed to age for a couple of weeks.

He now recommends that you only mill enough flour for what you plan to bake today, or that you let the milled flour age for 1-2 weeks before using it.

Those who promote grinding your own flour for health benefits are probably shuddering at the very thought of setting freshly milled flour aside for several weeks.  I’ve seen plenty of claims that you lose vitamins and other health benefits after a few days, I’ve not seen any verified studies proving that, though.

Another thing they don’t tell you is that home milled flour is just different from what you get at the grocery store.  To explain why, here’s a quick introduction to milling procedures, ancient and modern.

Millers originally used large stone wheels to grind flour; in many parts of the world that’s still the way grain is milled.  Water, wind, or animal power (including humans) kept the stones turning.  That’s why Holland has windmills.  Let’s all sing one chorus of “Down By the Old Mill Stream”.

A modern commercial grain miller uses a series of metal rollers to reduce the grain to flour in multiple stages, making it easier to separate out the bran and wheat germ and produce various types and grades of flour, with most of it becoming white flour.  For those who want whole wheat flour, they recombine the bran, germ and endosperm in the same proportions as present in wheat berries.

Most home milling machines don’t use stones or precise metal rollers, they’re what’s called an ‘impact’ mill, meaning they crush the wheat into flour between spinning metal plates. This has advantages beyond just the space requirements over a huge mill stone (no stone dust, for example.) But I don’t think it produces as finely and uniformly ground flour as a stone mill did.

You can use your kitchen sieve for this. However, the average kitchen sieve has about 25 metal threads to the inch, and that lets through a lot of big pieces.  I recently bought a much finer sieve (55 metal threads per inch) and have been experimenting with using it to separate out more of the coarser ground material.  I think this is mostly bran and germ but it appears to contain some endosperm as well.

A lot of the bran and germ is finely ground enough to get through even a fine sieve. so, no, this doesn’t get me a ‘white’ flour, but it does get me a lighter color and fairly finely-ground flour, which is better for certain types of baking. I use the more coarsely ground stuff in other types of bread, like rye bread, so nothing goes to waste, and I’ve got a bunch of it that I’m saving up to use in producing a sourdough starter using the methods Chad Robertson describes in his “Tartine Bakery” books.

Be warned, it take a fair amount of shaking to sift 2 pounds of flour through a fine sieve, and it is a bit messy.  I’ve given serious consideration to buying a lab-grade sifter with a mechanical shaker base and several sizes of wire mesh.

The differences mean that recipes don’t behave quite the same with home-milled flour, and the ‘green flour’ issue may not be the only cause. I think freshly milled flour is a bit damper than flour that’s been sitting in a bag in a warehouse or grocer’s shelf (and then in your kitchen) for what could be months. It seems to absorb liquids at a different rate and it takes a LOT longer to rise.  But the taste and texture are worth it!

Here’s a recipe that originally came from my mother-in-law. I’ve made it hundreds of times over the years using whole wheat flour from a bag.  It is much tastier made with freshly ground flour:

Scald milk then allow to cool back to room temperature.

Mix ingredients, knead for 10 minutes, then place in an oiled bowl, cover, and allow dough to rise until it has doubled in size, approximately 2 to 2 1/2 hours.

Bake at 400 degrees for 28-30 minutes or until internal temperature is 200 degrees. The loaf should be fairly dark on the bottom. 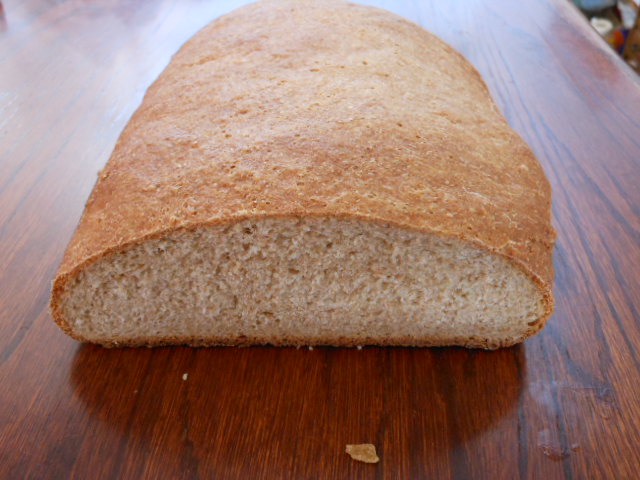